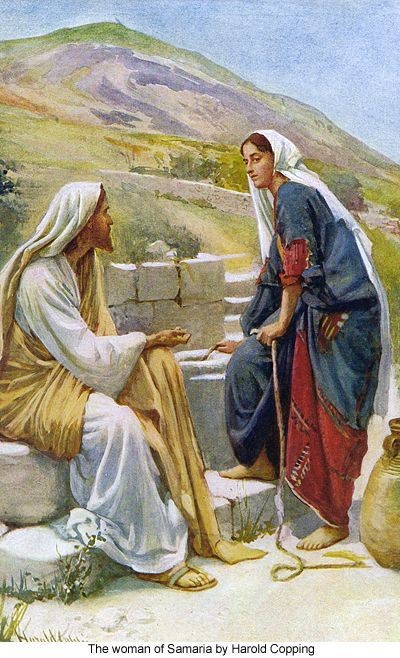 It was a summer day in Sychar. The women in the village made their daily trips to the public well early when the temperatures are cooler. Mornings around the well were as much a social club as a place to fill water jugs. The well was dug by ancestors of some of the residents a century or more before. It was the village’s only source of a commodity that none can live without.

It was hot. The sun was directly overhead as the woman slowly made her way along the path to the well. She hated these daily trips. Most of all, she hated that she felt isolated and alone. She wondered if the donkey, tied up in the shade, ever felt this way. Probably not. The donkey was built to carry heavy loads. The years of making these trips were taking a toll on her body and spirit.

She remembered a time when she was younger and more energetic. Married for less than a year, she looked forward to morning trips to the well. Although she didn’t appreciate the persistent questioning of the older women about her sex life. She wanted children. But so far, she mostly received bruises when she brought the subject up. She remembered when having children was something she could count on.

That was then. Five relationships ago. Her first husband was chosen by her family. He was much older but had a steady job. A friend of her father. He put her out a few years later. A pattern that occurred again. And again. She knew that finding her current partner was a real blessing. Kind and generous. Not willing to listen to the gossip on the streets. They were both beyond the point where children were part of their plan. She finally had a little security in her life.

Life began to unravel after her first husband divorced her. Looking back, she was fortunate. The constant abuse might have ended her life eventually. It didn’t take long before another man took her in. She was young, attractive, and wanted to be loved. She put herself into making things work. But they didn’t. Each time she knew that she became the focal point for the morning meetings at the well. Some days she hangs on by a single thread. This is how it seems anyway.

What’s this? A man is sitting at the well. Social customs were clear. Women fetched water, and men didn’t hang out at wells. She didn’t recognize the man, but she recognized the clothing. She remembered a time when she saw a man dressed like this one. He was Jewish. A Rabbi.

Jews and Samaritans don’t spend time together. The wounds between the two groups never healed from the time when their nation was split in two. Her ancestors separated and were conquered later by a power-hungry empire called Assyria. This was when they became known as Samaritans. The wounds that caused the separation were deeper than any well. And lasted longer.

The separation caused her people to see God from a different perspective. The Judeans still believed that God was found only in the Jerusalem Temple. Which Samaritans no longer had access to. What difference does it make anyway? Perhaps the Jews are right. Maybe Samaritans are cursed. At least this Samaritan is.

Water is crucial to life. And the woman didn’t have another place to get water. Besides, she was tired of going the other way every time a man or woman approached her. And Jews don’t associate with Samaritans any way. Jewish men find Samaritan women to be disgusting. So no worries. She was sure the man would leave as soon as he realized she was coming his way. No respectable Jewish man would get anywhere near her.

She was tired of going the other way every time a man or woman approached her.

As she made her way closer to the well, the man didn’t move. He just sat there looking at her. But not with condemnation. More like the way a father looks at his young son or daughter. A look that spills over with love and promise. The look that a teacher might give a star pupil. “Oh, great. Surely he isn’t going to hit on me,” she thought to herself. “He probably thinks I’m a prostitute.”

She was determined to fetch her water and get on with her day. So as she approached the well, she didn’t look at the man at all. Instead, she went straight to the well. He spoke clearly, in a manner that expressed certainty about himself. “Give me a drink of water,” he said. His tone sounded nothing like a man demanding to be served by a woman. His voice was gentle. Like someone asking a favor with no particular expectation and no strings attached. She suddenly felt empowered.

She turned to look at this man, this Jewish man, this Rabbi, who dared to jump across a chasm of social distance. This man looked up at a woman, a Samaritan woman, a woman with a past, to ask a favor.

“You are a Jew, and I am a Samaritan—so how can you ask me for a drink?” the woman responded with a renewed confidence that she didn’t know she had in her. Surely the conversation will end here. But it didn’t.

The man continued to speak with this woman with strange words. Poetic words. With words of hope and opportunity. But this man doesn’t realize who he is talking to. How could he? He is a stranger. A kind stranger. But a stranger, nonetheless, who couldn’t know her past. If he knew her history, they wouldn’t be talking.

The man describes her current living situation. How does he know? “You must be a prophet?” she declares. As the conversation continues, the woman could feel every thread of her perceptions, her experiences, her past hurts, coming unraveled.

In her excitement, the woman forgets all about who others say she is. Instead, she holds tight to the woman revealed by her conversation with a stranger. She leaves her water jug at the well and runs back to the village. She can’t hold her excitement. “Come and see the man who told me everything I have ever done. Could he be the Messiah?”

Come and see the man who told me everything I have ever done. Could he be the Messiah?
John 4:29

Do you feel like you are tied up so tight you feel as though you can barely move? Are you feeling some of the threads of who you are coming loose and falling around you? I invite you to join us and learn how becoming unraveled may just be the key to a future of greater hope. We meet each Sunday at 10:30 am. I hope to see you there. You can find more information about us on our website at FlintAsbury.org.

If you haven’t yet signed up for the Daniel Plan, be sure to do so.3 Each person living in our community who signs up receives your very own copy of The Daniel Plan Journal.4 If you are not a part of the Asbury Community, we still invite you to participate with us, but we ask that you purchase a copy on your own. These journals can be purchased on Amazon or from other vendors. You can also go to the DanielPlan.com store to buy this and other resources.