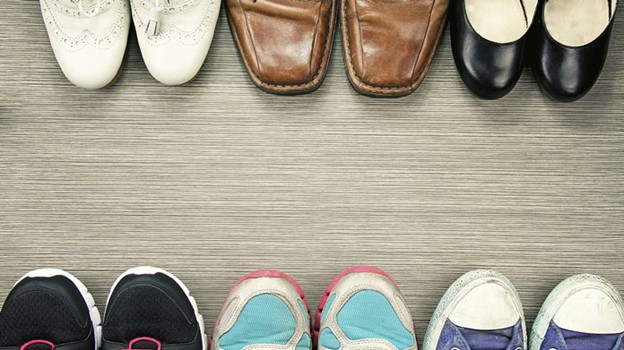 It was one of my dad’s favorite pearls of wisdom concerning how to get along with others. “Never judge a man when you haven’t walked a mile in his shoes,” my dad would say to me. Like all metaphors, borrowing shoes has its limitations. But there is a lesson in this wisdom that connects us to empathy.

What happens when we discover that our borrowed shoes, instead of taking us home to Kansas, we walk into a past that we would rather not uncover? Empathy happens when we take time to learn the history of how our brothers and sisters of color have been treated. One thing is for sure, wearing their shoes makes us uncomfortable.

Slavery is one of the most vicious and harmful acts of violence that humans can do to one another. The institution is so destructive that the harm perpetrated lasts for generations. Healing from the wounds of slavery is challenging but worth the journey.

Our country’s history is tarnished by an extended period of slavery that so damaged our spirit that 156 years later, we continue to prefer denial over restoration and healing. The damage was so extensive that the brokenness continues to hold our nation back from reaching the dreams God instills in every creature. A vision of life, liberty, and the pursuit of joy and satisfaction.

When political pundits shout soundbites that there is an America that we should want to go back to, they refer to a fictitious tale that ignores the violence perpetrated by unjust systems that privileged one group of people over all others.

Wash me clean from my guilt. Purify me from my sin.
Psalm 51:2

While empathy begins with borrowing another’s shoes for a stroll through their specific challenges and opportunities, the power of empathy comes after the mile is finished. In our case, it comes after we immerse ourselves into the truth about the laws we passed, the damage we perpetrated, and the prejudices we inherited. This is where hope is found.

King David is recognized as the greatest king in the history of Israel. The least son of a family who was descendants of a tribe known as Judah. Under David’s leadership, Israel became a global power, a nation of abundance. And a nation whose identity was tied to the God of their ancestor Abraham and the covenant God made with them that was to last for all time.

Yet, David is also known for his affair with Bathsheba, the wife of a loyal soldier. David made sure that Bathsheba’s husband did not survive in battle. How these two seemingly contradictory assessments of the same man are possible comes, in part, from David’s reaction to his own guilt.

David is credited with authoring the fifty-first Psalm, which begins with, “Have mercy on me, O God, because of your unfailing love. Because of your great compassion, blot out the stain of my sins.” David came to grips with his own failure. And so must we.

I suspect that David’s affair with Bathsheba wasn’t the worst of his indiscretions. This is the one that was caught on camera, metaphorically speaking. But his willingness to admit to and take responsibility for his own guilt is rare enough among humanity that David’s legacy is mostly untarnished. After losing their first child, Bathsheba gave birth to Solomon, who replaced his father as king.

When it comes to systemic racism, we are all complicit. We are all guilty. Even though we didn’t write the laws — even though some of the worst laws were repealed or replaced — damage remains.

This can be our legacy. David, in his Psalm, cried out to God. “Wash me clean from my guilt. Purify me from my sin.”

Healing begins only after we sufficiently understand the offense committed. Denial is not a balm. Denial is a pain-killer that soon wears off, requiring larger and larger doses. Denial is addictive, and we are addicted to a sanitized version of our history.

Latasha Morrison notes that “American culture teaches us not to sit in sadness and despair. Pretending that everything is okay, though, requires that we mask our true feelings.” Sometimes our true feelings are buried deep within layers of pretense. But if we walk far enough in the shoes of those harmed by our past, the layers of indifference eventually unravel.

Latasha reminds us that “God doesn’t want our masks; he wants all of us, all our emotions, even our sorrow, our despair, and our grief.”

The story of the Greenwood, Oklahoma massacre is one story among the numerous stories hidden under the rug of denial. A suburb of Tulsa, African-Americans moved to this area for jobs. Since people of color were prohibited from moving into Tulsa neighborhoods by racist laws, they settled outside the city.

Greenwood quickly grew into a “sophisticated, highly educated, and prosperous Black community” that led to envy and violent responses from nearby white communities. Tensions exploded after a nineteen-year-old shoe shiner was accused of assaulting a white woman while riding in a downtown elevator. Members of the black community guarded the courthouse to prevent a mob from lynching the young black man.

After shots were fired, the group guarding the courthouse fled back to Greenwood. The next morning a mob entered the Greenwood community, looting homes, buildings, and lynching black men. Airplanes flew over Greenwood dropping firebombs. It was an all-out assault with the intent of violence, destruction, and murder. Supported by institutions charged with protecting the public.

When the National Guard arrived, six thousand black residents were arrested, but not a single white person was arrested. By some accounts, ten thousand African Americans were homeless as a result of the attack. A thriving, peaceful community was left in shambles by the combined forces of lawless white supremacists, police, the National Guard, and other agencies of State and local government.

This massacre took place in 1921. Ninety-two years later, in 2013, Tulsa Chief of Police, Chuck Jordan, offered a formal apology for the Tulsa police department. An apology is far short of justice. Nevertheless, a shameful story finally resurfaced that had been intentionally buried and dismissed as untrue for nearly a century.

Recognizing the atrocities committed with the full support of elected government officials and public opinion is critical. We must realize that none of us are exempt from doing great harm to others. But our past is not who God created us to be. Each of us is a reflection of a God of love.

This is Episode 3 of our three-part series, Bridges. Be sure to read chapter three this week of Latasha Morrison’s book, Be the Bridge. And join us each Wednesday at Noon for conversation. 1