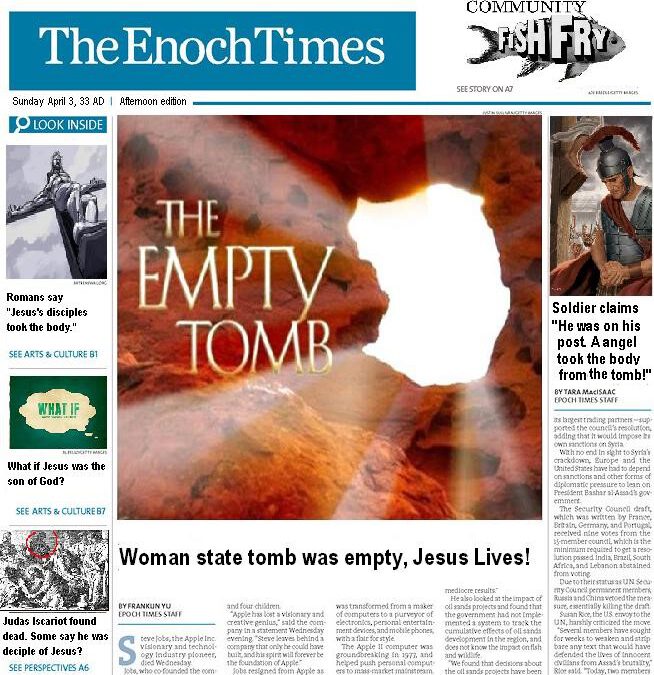 Planning for Easter Sunday this year is a lot different. Like plans for celebrating birthdays and other milestone events, in-person gatherings are a terrible idea. I suspect a lot of pastors worry that Easter may come and go unnoticed.

We all know the story. But like all stories, there are the stories behind the headlines. And in the case of the first Easter, the caption, EMPTY TOMB, isn’t the whole story. As miraculous as this story is, headlines fade away. But some stories change the course of history. Like the story, you and I are living right now.

Two Thousand years ago, we didn’t have the NY Times or CNN, and we didn’t have iPhones to record the action as it happened. Lies and coverups about what really happened may have ruled the day, were it not for a handful of faithful, ordinary people. Witnesses willing to share what they knew to be true. Those protecting their interest, who were responsible for Jesus’ death, saw the truth differently. So did their co-conspirators.

I know you are looking for Jesus, who was crucified. He is not here; he has been raised, just as he said
Matthew 28:5-6

After the execution of Jesus, the local authorities went to the person in charge of ruling Palestine to convince him that a conspiracy was underway. The chief priests and the Pharisees met with Pilate. They said, “Sir, we remember that while that liar was still alive, he said, ‘I will be raised to life three days later.’ Give orders to guard his tomb until the third day. So that his disciples will not be able to go and steal the body, and then tell the people that he was raised from death. This last lie would be even worse than the first one” (Matthew 27:62-64).

Attacking the character of an antagonist is as old as Cain’s denial of what happened to his brother Abel. Claiming that a lie is true is a modern-day tactic to try and write the narrative and sway public opinion. Calling any news source that disagrees with what you want to be heard as truth, fake news is today’s way of influencing popular opinion away from reality.

Death has a way of uncovering raw truth. As families, hospitals, states, and countries compete for supplies to fight COVID-19, the truth about how the world still works today unfolds in real-time. But if not for dedicated news journalists digging past prepared statements and rhetoric, the story behind the story gets covered up.

The vast separation between access to resources by people of privilege and the lack of access by people that are not privileged is enormous. The primary way of evaluating income inequality is called the Gini Coefficient. This measure calculates a score that reflects the distribution of income. The score uses fractions on a scale of zero to one, where zero means that everyone earns exactly the same income. A score of one means the wealthiest person receives all of the income. The Gini Coefficient for the United States is higher than nearly all other countries.

The income and wealth gap between rich and poor is as old as trade itself. And it was a frequent topic for Jesus during His public ministry. Jesus chose to live among the poor and challenge the systemic policies and people that created and perpetuated inequality. And His insistence on justice led to His arrest and execution.

The news that some groups of people can escape the threat of this deadly virus due to privilege is “in your face” evident. So much that even the repetition of carefully worded slogans cannot stop the truth from coming through. Nor can denigrating antagonists by calling them names. The truth will prevail, provided a handful of faithful, ordinary people are willing to share what they know to be true.

Joel McKerrow, in his book Woven, shares how his spiritual journey from sculpted to unraveled to woven, helped him to see his own hypocrisy.

Last week, our message focused on how our stories are woven together with the larger story of salvation. In this week’s message, we focus on how being woven together from pieces of our own stories with a greater story, reveals the truth even amid lies and coverups. We know why the tomb was empty. And we know that divine justice gets revealed through our testimony.

Jesus was silenced by people in power with a vested interest in keeping His story from becoming headlines. But the story of Jesus was no ordinary story. If God chose to live among people today, there would be daily news stories tracking every statement. But what if once again God chose to stand in the gap between rich and poor? What if God chose to fight for closing the gap between privilege and the lack of privilege?

What if God chose to bless the frontline workers that help us check out at the grocery store, pick up our trash, or hand us our carryout order? What if God made sure the needs of the healthcare workers were met, making safety equipment out of ordinary materials, and delivering protective masks to friends who had none? What if God spoke out against the abuse of power that sets privilege against poverty?

Would God’s story have a similar ending as it did that first Easter? Would our Lord be hauled before the Federal Courts for disloyalty to government and executed for insurrection? And would the powerful try to coverup the naked truth that God sides with the disenfranchised and opposes the use of wealth to divide us?

Next Sunday, April 19, we launch our new series, Risen. In this series, we continue to dig deeper into the inequalities that the COVID-19 pandemic is uncovering, and challenge ourselves to be among the ordinary, faithful people that keep the truth alive.