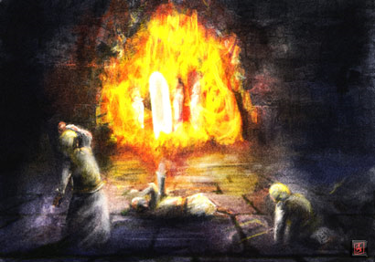 There is a story in the Bible that grabs my attention and stimulates my imagination every time I come across it. You can find it in the Book of Daniel. We named our current worship series after the prophet that headlines in this book. We call it the Daniel Plan. This dramatic, short story involves incredible faith that is demonstrated by three young men with weird names. But before I get to this story, it is important to frame it within the context of our series.

How many of you, if you had a bad meal, would give up eating altogether? I don’t mean avoiding a particular restaurant because you got sick the last time you ate there. Nor do I mean avoiding dark chocolate because you found it to be too bitter. I’m talking about a meal where the meat was overdone, and the potato was undercooked. A meal where you finished eating because you were hungry, but afterward, you wished you had just walked away. The way I feel whenever I decide to eat fast food.

But you and I continue to eat, don’t we? We don’t give up on food just because we had a bad meal. We don’t stop drinking water because we discovered that our public water contained lead. We go to a different restaurant, we order a different dish, we fix a different meal, we get in line on Tuesdays at the Asbury Help Center and get bottled water.

Stay with me now. There is more framework to build.

What is your dream for your life? What would you attempt if you knew you couldn’t fail? Why aren’t you pursuing this dream? Don’t you trust that God will give you the power to realize your dream?

What if I told you that God would give you everything you need to fulfill your dream? Would you be willing to surrender your dream to God and allow God to break down the barriers, provide the resources, and give you what you need to achieve your dream?

Pastor Rick Warren of Saddleback Church said in a message at his church that for him, hell would be if God were to show him what he could have accomplished with his life if he had just believed God a little bit more. When your life is over on this earth, what will be your regrets? Will you regret not taking a chance and pursuing your dream?

For me, hell would be if God were to show me what I could have accomplished with my life if I had just believed God a little bit more.

Perhaps you went after your dream and fell short. Did you try again, or are you still licking your wounds? If you tried more than once and failed more than once, you have my admiration for your tenacity. And perhaps your dream wasn’t what God had in mind for you. More likely, if you are like the rest of us, God was, at best, a minor actor in your pursuit.

In Daniel, chapter 3, we read that Nebuchadnezzar, King of Babylonia, ordered his builders to erect a gigantic gold statue. The statue was a stand-in for a god that the King and the people around him mistakenly thought had great power. Apparently, this god wanted people to build statues and bow down to them. The king gave orders for all his officials to come together for the dedication of the statue. Once the officials gathered, a herald announced in a loud voice, “People of all nations, races, as soon as the music starts, you are to bow down and worship the gold statue. Anyone who does not bow down and worship will immediately be thrown into a blazing furnace.”

Wow! What would you do? The smart thing to do is to do as the king says. Right? Why become an inside member of a BBQ when you can disappear into the crowds. After all, you can always cross your fingers or toes. Just don’t let someone see you who may turn you into the authorities.

Him who by means of His power working in us is able to do so much more than we can ever ask for, or even think of…
Ephesians 3:20

The cops arrested three young men by the names of Shadrach, Meshach, and Abednego, and took them to stand before the king. The charge was failing to worship the statue after the music began. The king was furious. Whatever anger management training Nebuchadnezzar had on his resume went right out the window. What set him off was that these young men stood up to him, explaining that their allegiance was to the real God and not to some human-made statue. Yikes!

Suddenly Nebuchadnezzar leaped to his feet in amazement. He asked his officials, “Didn’t we tie up three men and throw them into the blazing furnace?” They answered, “Yes, we did, Your Majesty.” “Then why do I see four men walking around in the fire?” he asked. “They are not tied up, and they show no sign of being hurt. And the fourth one looks like an angel.”

The story ends well for the three men. But you can read the details for yourself. I retold this story in my words, shortening it quite a bit. What happened? Let’s talk about the ending and what it means during worship on Sunday.

If you haven’t yet signed up for the Daniel Plan, be sure to do so.1 Each person living in our community who signs up receives your very own copy of The Daniel Plan Journal.2 If you are not a part of the Asbury Community, we still invite you to participate with us, but we ask that you purchase a copy on your own. These journals can be purchased on Amazon or other vendors. You can also go to the DanielPlan.com store to buy this and other resources.

We worship each Sunday at 10:30 am. I hope to see you there. You can find more information about us on our website at FlintAsbury.org.