Good company: A stranger on the bus 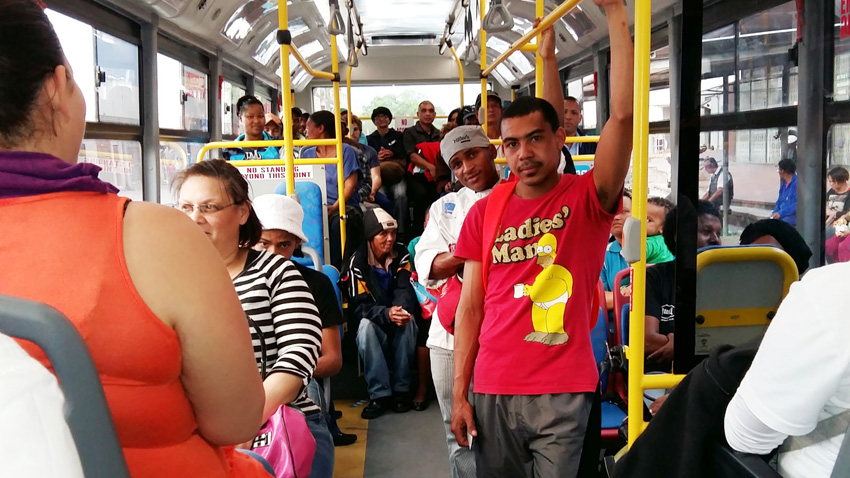 Joan Elizabeth Osborne is an American singer, songwriter from a suburb just outside of Louisville, Kentucky. Born in 1962, Joan is best known for a song she recorded written by songwriter Eric Bazilian titled “One of Us” from her album, Relish, released in 1995. The song captured listeners’ imagination around the globe with its provocative question, “What if God was one of us?”

What if God was one of us? The obvious answer to this question for Christians comes too quickly for its impact to affect us in the way that it should and needs to impact us. So let’s first frame this question.

It would take 93 Billion light-years to travel across the entire universe from edge to edge by some calculations. Since light travels almost six trillion miles in one year, the distance across the universe is incomprehensible. The universe contains somewhere between two hundred billion and two trillion galaxies, each containing billions of stars. This makes my head hurt when I try to imagine the immenseness. 1

God created it all. Every star, every planet, every galaxy. And God sits outside of it all while also permeating, animating, and sustaining every last molecule. Now try and answer this question:

What if God was one of us?

For me, this realization means that when I pray, I’m not praying to an invisible power that I can never be sure is listening. Instead, I’m praying to a God I know something about. And a God who knows everything there is to know about me. It means I can be real in my prayers, knowing that the God I pray to knows the pains and pleasures of what it means to be human.

Centuries before the birth of Jesus, God made a promise through a prophet by the name of Isaiah to people under attack. Two hundred years earlier, their neighbor to the north was part of the same nation, called Israel. Civil war tore the country apart, and two separate nations emerged. Now the Southern Kingdom of Judah was threatened by a war they couldn’t win.

God offered a sign to Judah’s king that if he refused to join their alliance and held his ground, his enemies would not prevail. The sign was the birth of a child to a young woman. The prophecy was that before the child came of age, the threatening nations would be conquered by a much larger superpower. And this is what came to pass.

This prophecy inspired each generation that came after as a reminder that God is not distant and uninvolved. Instead, God is active and nearby.

He will be called Immanuel which means, “God is with us”
Matthew 1:23

Several centuries later, in a small village in the hill country of that same nation, now suffering under Roman occupation, this same prophecy comes alive. A young girl is pregnant, and her husband-to-be hears a similar prophecy in a dream.

The meaning of this ancient prophecy is replayed in Joseph’s dream. He will adopt this child and faithfully wait to see what God has in mind. Knowing that God promises to save humanity through this child.

God is still a “stranger on the bus” to a lot of people. But this won’t always be the case. There is no time like the present to introduce yourself to the God who already knows you.

Joan’s song poses another question for our consideration. “What would you ask if you had just one question?” And would you call God by name? If so, what name would you use?

This week’s theme is Emmanuel. One of the names that we use to refer to Jesus. This week we focus on the nearness of God.

The packet of seeds is a symbol of community. From tiny seeds comes beauty and nutrients that help sustain life. Consider how we can all grow together as a community. Ask God to guide and inspire you.

God is always near. And God proved His love for us by living among people, teaching through His words and acts. Incarnation is the subject of our December series. I invite you to join us each Sunday online at 10:30 am. Be sure to order and pickup your Christmas celebration gift box on our website homepage.