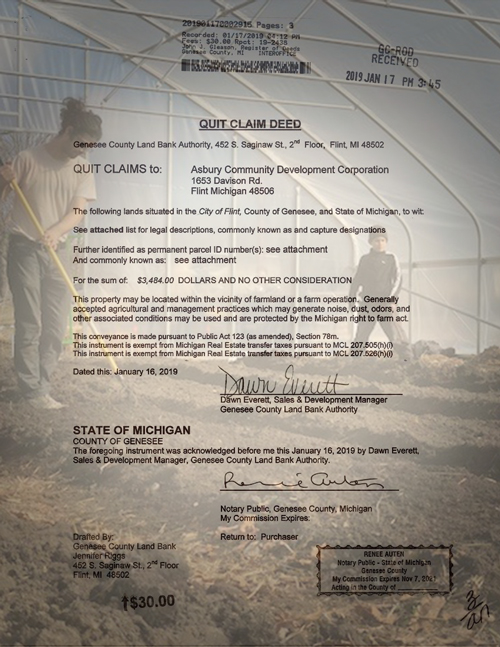 Someday it will be necessary for me to retire. Like strawberry plants, fruit trees, and grapevines, we can produce fruit for many years, but there comes a time when our capacity begins to fade. Cyndi and I live in a parsonage. A parsonage is a house that belongs to a church. Retirement will mean finding another place to live. And given our love to grow fruits and vegetables we are considering buying land. But where?

Jeremiah was a prophet during a difficult time in Judah’s history. The neighborhoods had degraded, and lawlessness prevailed over peace and love. But God was up to something. The enemy, in their case, the Babylonians, would soon scatter the residents and occupy the community. Land values were sure to plummet even further. Who wants to buy in a neighborhood on its way down?

But Jeremiah also believed that God would not destroy Judah. The doors would remain open for years to come. The neighborhood would be restored. And this would happen as the people turned to God as the source of their power, rather than put other gods, other priorities, ahead of the One True God. Jeremiah knew that there would come a time when he would want to own some of that very land, that for the foreseeable future, would be worth very little. Someday the land’s value would return. God promised, and Jeremiah believed God.

So Jeremiah had an opportunity to buy the land of a deceased relative. Jeremiah could have declined. But the fact that God let Jeremiah know that this land offer was coming convinced him that God was behind this. God would not mislead Jeremiah. God had been faithful to Jeremiah, and Jeremiah was faithful to God.

I bought the field from Hanamel and weighed out the money to him… take these deeds…and place them in a clay jar, so that they may be preserved for years to come. The Lord Almighty… has said that houses, fields, and vineyards will again be bought in this land.

It is a “Cinderella” story. A story of a comeback. A story that warms the heart and restores our faith in God. And it actually happened. God did restore the land, and the people returned and rebuilt the neighborhood. But it wasn’t easy.  There were a lot of good reasons to quit. Rebuilding is hard work and risky. We have to rely on one another. We have to rely on God. People let us down. But, God doesn’t let us down.

The people of Judah had turned their back on God, and when this happens, the inevitable consequences is death and destruction. I don’t believe that God comes across with a divine, economic hurricane, and smites the land and people. God doesn’t need too. We smite each other and the planet we live on. People can be each other’s worst enemies, but we can also be great neighbors to one another.

Scarcity is a breeding ground for violence. When we are lacking, and there is competition for resources, we organize into sides, or sometimes we decide to go it alone. When there is scarcity, we want to be first in line. We realize that there are only so many pallets of food and bottled water. If we want our share, we better be in line first when there isn’t enough to go around. Our priorities are immediate. Which line do I jump into? Which god is likely to serve me best?

But God is in this business of community building in the long run. Eventually, the power of the Holy Spirit prevails. It begins with a faithful few who gather in buildings and homes around the community to worship the God who will make a difference. Many were worshiping there when it all began. Some never stopped. Many joined later when they realized that God was calling them to be a part of the change that is to come.

And the numbers begin to grow. Slowly at first. Occasionally, a significant increase comes all at once, when the Holy Spirit is allowed to move unconstrained by fear and doubt. As the number of worshipers grows the hand of God is seen in numerous ways. Testimonies begin to spread. Witnesses come forward. More believers return to worship with others who see God at work in the community. The story goes viral.

Our Eastside community is lacking in many things. People have left certain scarcity, schools and churches have closed, and businesses have closed. Blighted buildings and vacant land, however, are abundant. Waiting for God to call more Jeremiahs to invest in the future.

The prudent investor weighs the risk with the potential reward, since rebuilding neighborhoods is a risky business. People make and break promises all the time, businesses fail every day, and people are slow to adapt. So we are understandably skeptical. We are skeptical. We have seen more failures than Cinderella stories coming true. The shoe often doesn’t quite fit, or the shoes are stolen and discarded along with the hopes and promises.

Worshipers declare abundance in the midst of lacking

But the worshipers still gather. The worshipers declare abundance in the midst of lacking and thank God for the blessings that are before us. We awoke this morning to a world that continues to spin around the sun. The air, so far, is still suitable for life. We will eat today, likely more than we need. And, hopefully, we will thank God for it all, and worship the One who we know gave His life that we can have life abundant.

And we will invite others to gather and to worship the God who can rebuild a neighborhood. While we may disappoint one another, when we rely on our own power alone, we worship a God who is the ultimate builder of neighborhoods, communities, and nations.

We worship each Sunday at 10:30 am. I suspect that God is calling you to join us. But joining a group that is betting on God to pull off a Cinderella story may seem risky. But if on some Sunday morning, you have this feeling that you should be somewhere, it just may be that God is answering my prayer and calling you to Asbury.

I lead a short Bible study in the Asbury Café at 9:30 am. You can find more information about us on our website at FlintAsbury.org.