Love: The blessings of home1 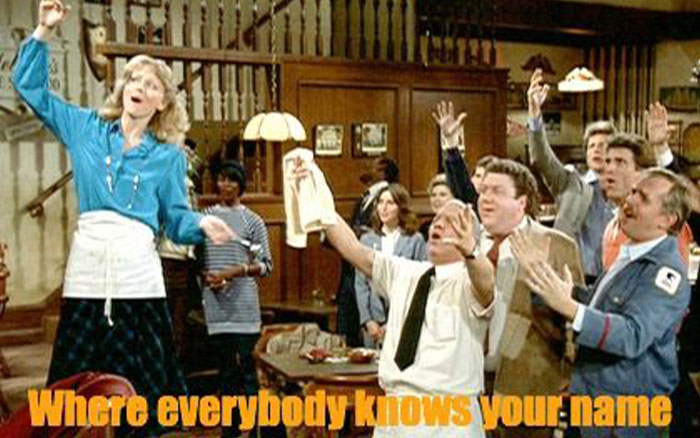 A popular sitcom aired for eleven years called simply “Cheers.” The show’s name is a play on words since cheers is a common expression heard in bars that is said as a person takes their first sip. The show is best known for the ending line in the theme song that sums up the bar’s popularity. Cheers is a place “where everybody knows your name.”

Cheers didn’t catch on at first, landing near the bottom of the rating list. But the show soon gained popularity staying in the top 10 for the rest of its run and number one during its 9th season. I lived in Massachusetts during the show’s peak popularity. And I frequently took visitors to see the Bull & Finch Pub in the Beacon Hill neighborhood of Boston to see the model for the show’s set. The show’s opening scene featured the entrance to this popular restaurant and bar, lifting its visibility to tourist attraction status.

Being understood is a heart’s desire that yearns to be recognized by the people around us. So the cast of Cheers gathered in a neighborhood bar where each was known by the others. “You get me” hovered in the air like the smell of comfort food coming from the kitchen.

Seltzer places loneliness at the opposite end of being understood and argues that love crosses what is otherwise a divide between understanding and loneliness. Being understood is paramount to being seen and affirms our identity. 2

This idea of being seen, understood, and loved by the people around us is critical to our identity and sense of value. And while we generally think of individuals, these ideas apply to groups, neighborhoods, villages, cities, and even nations. In this case, comparative rankings often come into play.

For example, Flint’s population dropping below 100,000 is a big deal. And in a 2014 Mlive article, Flint City Council President Scott Kincaid explained that this milestone would negatively impact Flint. Kincaid noted that “fewer funds will come into the community through state and federal sources.”

Asbury recently received a large grant from federal funds allocated to Flint, but the award was half of what we needed to do the project. Perhaps this is one example of the fallout.

Redirecting our attention to the more positive, Dayne Walling, mayor of Flint at the time of this article, reminded us that “the 100,000 population benchmark doesn’t reflect a community’s worth.” More important, “The quality of life in any community is not determined by its population size.”

Nevertheless, our perception of worth lessened when Flint was lumped into the category of smaller cities and municipalities. Moreover, our need for financial assistance is even greater due to population decline, yet our share is substantially less than before.

I took this trip back into the Flint news archives as I reflected on a promise that God made through the prophet Micah. The promise goes something like this — Bethlehem Ephrathah, you are one of the smallest towns in Judah, but out of you, I will bring a ruler for Israel (Micah 5:2). This prophetic declaration is bold given Bethlehem’s relative insignificance in population.

Furthermore, the prophecy links the ancestry of this future leader to a previous dynasty long remembered as the heyday for the nation. It’s like God might be saying, “You haven’t seen anything yet!”

As Christians, we give significance to Micah’s prophecy. According to scripture, this prophecy was fulfilled, and we celebrate this fulfillment at Christmas, often reenacting scenes.

But this is only the beginning of the upside-down, underdog coming out on top paradox that is the center of our faith. The whole story, as told by the writer of Luke, is a story of contradictions.

Elizabeth, too old to bear children, gets pregnant as the story unfolds. Her husband is a rather uncelebrated local pastor. He learns about his wife’s pregnancy through an epiphany while working at the church. Their child is destined to usher in the public ministry of the One, who was promised by numerous prophecies.

Meanwhile, a teenager living in the hill country in a small village even less significant than Bethlehem has an epiphany of her own. When she discovers that she is pregnant, even though she has never had sex with her fiancé, her future looks bleak by any standard we might apply.

However, revealed to Mary in her epiphany is that she will bear the promised One. After telling Joseph, Mary leaves town to stay with her relative Elizabeth for a while.

According to Luke, when Elizabeth first saw Mary coming to visit her, she was filled with the Holy Spirit. The baby inside of her also seemed to respond to the unfolding excitement. These women were the first to know that God’s plan for salvation was coming to fruition.

The knowledge they shared was both inspiring and dangerous. A holy scandal was coming to live inside their wombs. Soon their secret would be known by the world. In the meantime, they stepped up to the obligations put onto their shoulders.

Mary responds in song, the words of which have been sung for generations. A song that begins with Mary realizing she is known. Not just by her friends at school or around the neigbhorhood. Mary is known by God.

God has remembered me, his lowly servant! From now on all people will call me happy
Luke 1:48

The lyrics are a recitation of God’s economy. A world where declining cities are ranked near the top. A neighborhood where each of us is known, understood and loved.