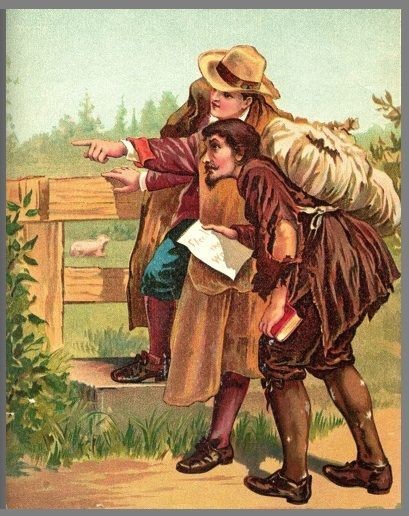 This past week we have had a lot of rain. And when we walk on clay-rich soil that has been soaked with rain, our boots get heavier as the mud accumulates under our feet. It is a good idea to clean our boots before we track mud into places where mud isn’t welcomed.

This sort of sticky mud is a great metaphor for something that bogs us down and makes it more difficult for us to move forward. This is different than other obstacles that get in our way and block our progress. Mud-like obstacles are more subtle. They stick to us, adding weight. They bog us down.

Can you think of feelings that remind you of the sort of mud that comes from rain and clay? How about worry, dread or regret?

In the movie and book, The Pilgrim’s Progress, the main character, Christian, lives in a city with a name that contradicts the reality of its residents. The City of Not Cursed. The more accurate name for the city is the City of Destruction. It is a city that has has lost its way.

Christian, after reading a book, is convinced that he needs to leave the City of Destruction before it’s too late. The metaphor that the author chooses to use that illustrates Christian’s need to leave behind what he knows, in order to pursue what the book describes, is a burden. In the movie, Christian is wearing a backpack that he cannot take off without help. The backpack represents Christian’s burden.

As Christian leaves the city and realizes that he doesn’t know where to go, he cries out to the Lord to be shown what he needs to do. As he stood frozen, a man named Evangelist speaks to him, and Christian asks the man for help. Christian has read the Book that tells him what to do, but he realizes that he is unwilling to do the first thing, and unable to do the second. Christian is stuck.

As Christian continues on his way, he is chased by two of his neighbors, Obstinate and Pliable. As their names imply, one is determined not to change and the other changes his mind when the resistance gets difficult. Of course, in the movie, their tendencies come out in their words and actions. Just as our tendencies show in our words and actions. Some of us are more like Obstinate and some of us are more like Pliable.

Christian must decide whether he will listen to Obstinate or Pliable, just as each of us must find a balance between our obstinance and our pliability. If we are not willing to be molded into something different, if we are obstinate and unwilling to be pliable, it is difficult for us to make the choice of following the Way to the gate. Yet if we are too pliable, and therefore not willing to continue on the Way in the face of resistance, we are likely to change our mind and take what looks like an easier way.

In our story, Pliable decides to go with Christian after hearing about the promises in the book. And, of course, Obstinate hurls a few insults at both of them and leaves. But shortly after Christian and Pliable continue on their way, they get stuck. We learn that the two of them walked right into the Slough of Despond. A place that is full of the stuff that sticks to us like mud sticks to our boots. The sort of clay enriched mud that we have around us after it rains.

O Lord… Destruction and violence are all around me, and there is fighting and quarreling everywhere.
Habakkuk 1:2-3

In the book we learn that this mud is a metaphor for our fears, doubts, and discouraging apprehensions about ourself.

Of course, these are the very emotions that can cause us to give up, turn away, and accept what may appear to be an easier way. Pliable, as expected, is quickly discouraged and lashes out at Christian for talking him into going along. Pliable vows to go back as soon as he gets out, which he does, without helping Christian, who is sinking further into the mud as a result of his burden. Pliable leaves without so much as a goodbye.

Christian is determined to go on, but the muck is too much for him. Christian cries out, and soon a man comes to his aid. The man’s name is Help, of course. “I came because you called me,” Help tells Christian, who is now safely on firm ground. As Help dumps water on Christian to wash off the muck that covers him from head to toe, Help explains to Christian about the Slough of Despair. No wonder Pliable changed his mind about going with Christian.

Worldly Wiseman’s argument read like an ad for a new subdivision located just outside the problems of the city.  Instead of dangers, it offers safety, friendship, and contentment. The Village of Morality is conveniently located within a short distance of everything you need. And, Worldly Wiseman stresses, there are houses available and a living standard that, while a little more expensive, they are high quality. Even better, Christian would be in the company of neighbors who are financially secure and live a good life.

But, just as Christian gets close enough to see the village, he begins to notice how steep the hill is leading up to Legality’s house. Christian also notices fire coming out of the mountain in front of him. This way did not seem quite as easy as Worldly Wiseman claimed it would be.

Again, Christian stands frozen, unsure of what to do. Does he continue to climb the hill to meet Legality or turn back? Worldly Wiseman promised Christian that this would be a much easier way. But his promises didn’t seem to match reality. Fortunately, someone who had told Christian how to find the gate came along. When Evangelist sees Christian staring at the hill to Legality’s house, he reminds him to return to the Way that he was following before.

Sometimes we have so much mud stuck to our boots we feel like we can’t move any further.

Unfortunately, the characters that we meet in our own lives do not have names that clearly state their intentions and bias. I hope that you will join us as we follow Christian’s journey towards the light where he is to find how to be relieved of his burden. More importantly, my prayer is that when you find that you are so deep in the mud that you cannot move, that you will find the help that you need.

We worship each Sunday at 10:30 am. Come learn why it is important to tell your story and how to do so. I lead a short Bible study in the Asbury Café at 9:30 am. You can find more information about us on our website at FlintAsbury.org.