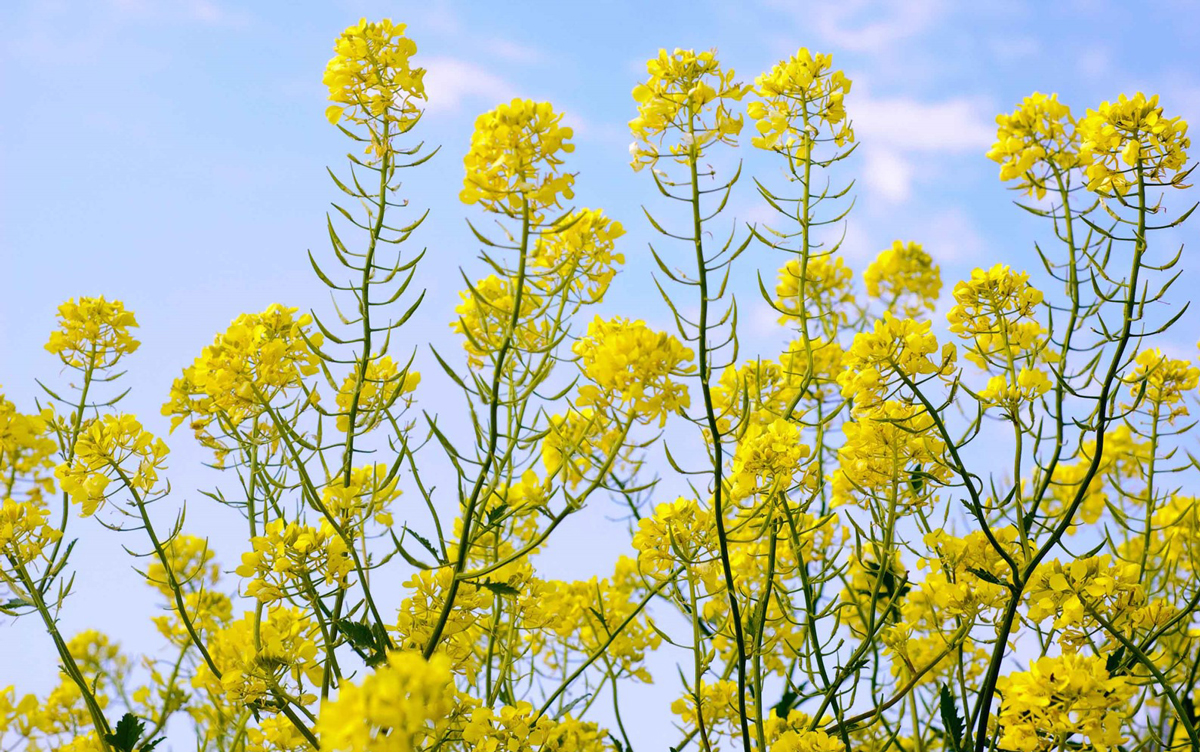 My mom was known for her greens and cornbread. But my dad set the precedence for kicking them up a notch at the table. I still remember dad using a paring knife to cut up white onion on top of the greens on his plate, along with hot peppers. Not all of my siblings follow his practice, but I do. And we all apply generous amounts of vinegar infused with hot peppers.

But if I wanted a taste of my mom’s greens in between visits, I had to learn how to cook them myself. One secret my mom shared with me was variety. While she liked the taste of mustard greens, she preferred adding collards or turnip greens to neutralize some of the peppery taste. I also learned to cut up a turnip in my greens for texture.

Mustard greens are easy to grow. The hardest part for me is handling the tiny seeds. Some are barely a millimeter (.04 inches) in diameter. While they’re not the smallest of the vegetable seeds, they’re in the running. But they germinate in just over a week.

The plant grows into a shrub if mustard greens are left to their own desires. As a result, there are mustard shrubs almost ten feet high. According to her website SimpleStead.com, Tasha Greer harvests brown mustard seeds when the plants are 5 to 6 feet tall, and the seed pods are ready to split open.

Let’s set the mustard aside for the time being.

This Sunday marks the 21st anniversary of the attack on the World Trade Center and Pentagon, commonly known as 9/11.

A Pew Research conducted in the months following the Sept. 11 attack found that 78% of those surveyed believed that the prominence of religion in the United States was growing. This was a considerable increase from the 38% who believed this only eight months earlier. It had been 40 years since religion held such a position in the minds of ordinary people.

Nevertheless, this shift was not matched by a sustained increase in attendance at religious services. Nor was there evidence that religion played a more prominent role in Americans’ personal lives.

The same study also validated a president’s impact on their political party. A call by President George Bush for tolerance toward Muslims paved the way for nearly two-thirds of conservative Republicans to respond favorably toward Muslims in this country. This number was up 29 percentage points from a survey conducted earlier that year. However, only one-third of those surveyed saw any commonality between their religious beliefs and those of Muslims.

American confidence in government and President Bush, in particular, climbed to unprecedented heights after 9/11. Only to fall a short time later as the shock waned and concern over daily realities returned. The approval ratings of President George W. Bush reached new lows along with Americans’ confidence in the government with rising gas prices and concern over the war in Iraq. In addition, the administration’s mishandling of disaster relief following the Hurricane Katrina disaster in 2005 resulted in further decline.

What is the Kingdom of God like? The tiny mustard seed grows and birds make nests in its branches.
Luke 13:18-19

All of this is to say that public opinion swings from peaks to valleys as we individually react to events while influencing each other’s opinions and attitudes. Like mustard seeds, public opinion is easily scattered and germinates quickly.

The three synoptic gospels, Matthew, Mark, and Luke, each offer a comparison that Jesus made between mustard seeds and the Kingdom of God. In His telling, Jesus focused on the size of the seed compared to the benefits of the shrub that grows from the seed. “A man takes a mustard seed and plants it in his field,” says Jesus. “And the plant grows large enough that birds make their nests in its branches” (Luke 13:18-19).

My family and commercial growers, including Asbury Farms, harvest greens while they’re only a few inches high. At this stage, the leaves are still tender. But the Kingdom of God features mature plants bearing tiny seeds that easily travel.

Why do you suppose that public opinion towards the prominence of religion in the U.S. soared after 9/11? Was it that churches led the response and recovery? Of course not. Public figures with the power to organize a response and allocate resources had to step up and lead the way.

But there was something about the hope represented by churches that brought comfort amid fear and uncertainty. And church attendance spiked for a few weeks before returning to the slow, downward trend that began several decades ago.

Duke Professor Mark Chaves noted that while there was a spike in church attendance in the weeks following 9/11, this event did not have a lasting effect on Americans’ attitudes toward attending church.

So what might have an effect on public opinion towards church attendance? First, the gospel is a story about God choosing salvation over destruction. Second, God chose love over hate, offering divine grace and reconciliation by living among us and leaving us with instructions for an abundant life.

But this truth needs to travel light and be easily carried. The gospel must stick to our clothes and feet to take root wherever we travel.

Elsewhere Jesus says that the burden He brings to us isn’t heavy. Instead, those who follow Him find joy and abundance amid chaos and conflict.

If you’re already a believer, share your testimony wherever you go. Not as a burden you try to place on others, but as an invitation to abundant life.

And if you have doubts, you owe it to yourself to dig deeper into the source of your disbelief.

The Kingdom of God is like planting a tiny seed that grows to provide a safe haven while producing even more seeds and more abundance.

Candace Simpson. Who Can We Be Together? A Biblical Exploration of Luke 13. New York: United Methodist Women, 2022.