Never alone: God is in the roses1 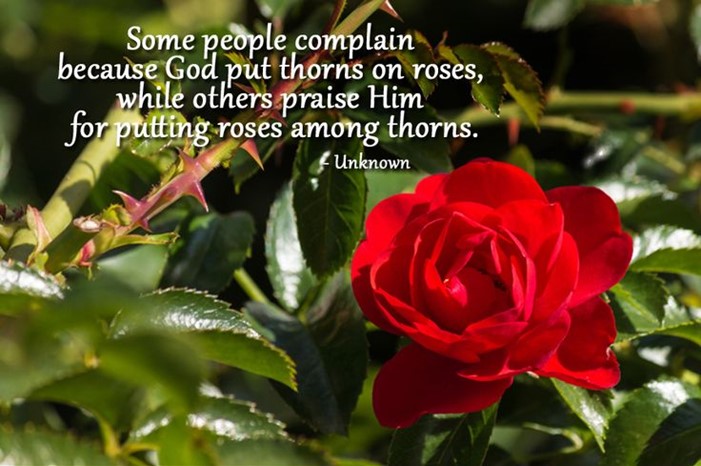 Before someone blames this situation on a lack of Christian values it’s important to point out that this percentage is about the same regardless of religious affiliation.

Anyone who has experience raising children has some idea of how daunting this responsibly can be when their work is divided among two or more. A single parent takes on a role that requires a couple of superpowers to pull off. Fortunately, many parents find that they have just enough superpower to pull it off quite well.

Tamara Mason, a licensed social worker, writing for YourTango, lists seven capabilities that can really help single parents thrive rather than just get by. She begins her list with the importance of a positive attitude. Then, realizing that it is human nature to see everyone else’s pasture as greener, Tamara encourages single parents to focus on what they can do. 3

The story of Judith is a story of international conflict and intrigue. The book is found in a relatively obscure portion of the Christian Bible known as the Apocrypha. This section is left out of many biblical translations of the Old Testament because the writings weren’t included in the official list by the early church. The book was considered worthy of study but fell short of their assessment as divinely inspired text.

Reading the story this past week reminded me of stories I’ve read in the NY Times or Washington Post. In this story, two nations are in a cold war that is heating up. Each is lining up allies to increase their power and influence.

The nation of Assyria, led by King Nebuchadnezzar, gets turned down by the countries it was counting on as allies. This included the Nation of Judah, where Judith lived. Her leaders concluded that Assyria had no chance to win a war against their rival nation, Medes. But to everyone’s surprise and dismay, Assyria prevailed. And Nebuchadnezzar vowed to take revenge against all of the countries that chose not to become his ally.

Hindsight often appears to be 20/20. If Judah had only sided with the Assyrians, they could have been on the winning team. Instead, they’re now under attack. But in their defense, it hadn’t been that long since they had returned from exile and rebuilt their community and city.

The Judean leaders tried sending a peace delegation to stop the pending attack. Still, Assyria wasn’t willing to back down. Their military forces were marching towards Jerusalem, the capital of Judah. And the people of Judah were terrified.

A national day of prayer was called. So the people gathered at the temple dressed in sackcloth and with ashes on their heads. Sackcloth and ashes were a sign of mourning. It was a heart-warming scene. An entire nation coming together as one voice and praying to God for deliverance from their enemies. One nation, under God, praying that the liberty and justice they desired wouldn’t be taken away from them by a relentless enemy led by an arrogant king.

Judith was a widow. Her husband died from heatstroke while overseeing the annual barley harvest. She was still grieving his death while stepping up to the responsibilities and obligations of a single-parent household. Scripture doesn’t tell us the age of their children, other than there was clearly not a child old enough to run the family business.

Judith was well-liked and respected in her community. She had a reputation for wisdom. Perhaps this meant that she was an older woman. Yet, the writer makes a rather big deal over her feminine beauty. Apparently, when Judith entered the room, people took notice. And Judith’s story focuses on the powerful men noticing her beauty.

The leaders of Judah were put on notice by the Assyrian General that war was imminent. As a result, Judah’s supply chain collapsed, interrupted by their enemy. Anxiety and worry over the inevitability of Assyria’s attack took a toll on morale and unity. As a result, the Judean leaders planned to surrender.

But Judith disagreed with their decision. Why would God rescue them from calamity only to turn them over to a ruthless enemy who would take away everything they had? “Surely God will come through,” Judith argued. “Don’ give in so soon!”

Judith hatched a plan. Was her plan also God’s plan? I’m guessing she wasn’t totally sure that God was behind her plan. But I’m convinced that Judith believed that whatever way it went, God was with her. And she was willing to accept whatever resulted. So despite every reason to doubt, Judith thought that God would not standby and all Judah be destroyed.

Danielle Brown writes in You are Enough that “Judith understands that God’s ways are different from [human] man’s ways, and she trusts that God will save her people from their enemies.” But if this is true then what can Judith do to help?

Judith was a natural at leading worship but likely never realized this particular superpower in herself. I suspect that until she stood in front of her neighbors that day, Judith didn’t know what words would come out of her mouth. She may have made some notes ahead of time. Perhaps the girl had an outline. She may have even practiced her speech. We simply don’t know. What we do know is that the people worshiped with her and that “all the people said amen.”

O my God… You have planned it all — what is happening now, and what is yet to be. Your plans have always been carried out… All the people replied, Amen, amen!
Judith 9:4-5, 13:20

I won’t spoil the plot. Instead, I encourage you to read Judith on your own. Allow yourself to become an insider in the story. Imagine yourself as Judith. What superpowers does she have that you feel like your missing? What superpowers do you have instead?

Plan to join us this month for Part one of our new series, Better together. We plan to hear from several women in the Old Testament and their contemporary versions we can actually see and hear from between now and Thanksgiving. Bring a friend with yo u.