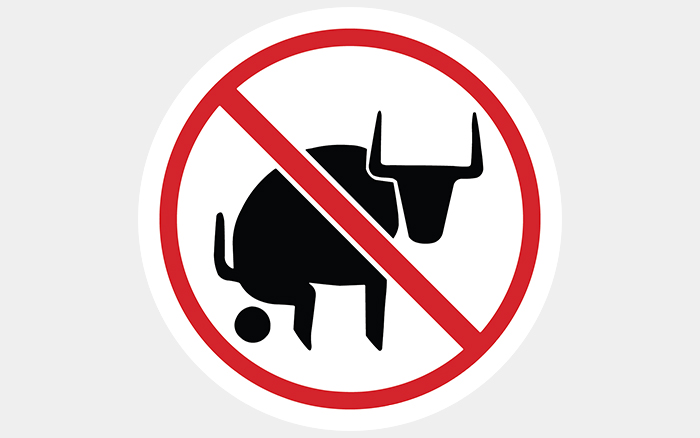 We’ve all been there. A time when someone is speaking about a topic they clearly know nothing about. Truth and lies flow out with equal measure and emphasis. Even if we like the person our minds wander to more productive scenery, wondering when the speaker will finally grow tired of hearing the sound of their own voice.

This scenario, according to Princeton Professor Harry Frankfurt, is an illustration of bull (2nd word intentionally omitted). 2

“[Bull] is a greater enemy of truth than lies are,” concludes Professor Frankfurt. The bull artist is so dangerous because he or she makes no distinction between truth and lies. Fact or fiction doesn’t matter to the speaker. A liar at least cares about the truth. The bull artist writes Frankfurt “does not care whether the things he says describe reality correctly. He just picks them out, or makes them up, to suit his purpose.”

If this sounds familiar, you may be listening to politicians and journalists who are particularly adept at spewing bull. Besides its blatant disregard for the truth, the danger of bull is that culturally we are likely to give the bull artist a pass when it comes to the validity of their statements. While at the same time, we hold someone who tells a lie accountable, even if unintended or misinformed, if not said within the context of bull.

Bull is often used as a substitute for knowledge about a particular subject. We expect candidates for political office, to weigh in on a wide range of topics. Most of which they and we know very little about. The result is bull as a substitute for actual facts.

In a democracy, a decision to implement a policy, write and enforce a law, and oversee the nation’s vast resources requires voting. A decision comes from choosing sides of any and all arguments when the time comes to vote. And in the U.S., most of us choose to support one of two political parties even though other parties exist and some candidates self-identify as independents.

This leads to one of the primary dividers that sort us into one of two ideological camps. Even though the vast majority of us likely fit in more than one camp based on our core beliefs.

Dr. Brené Brown writes that “one of the biggest drivers of the sorting that’s happening today is the proliferation of the belief that you’re either with us or you’re against us.” Philosophers note that this argument is a false dichotomy since there are almost always other choices. Nevertheless, some politicians regularly spew bull to force us to take sides. 2

But what if we refuse to accept the terms of the argument and challenge the framing of the debate? This is a hard choice because doing so is a lonely place to go. Insisting that a better decision comes from debate rather than division sends us out into the wilderness.

Dr. Brown notes that standing up to bull and refusing to take sides is challenging. Refusing to take sides is difficult “Because the argument is set up to silence dissent and draw lines in the sand that squelch debate, discussion, and questions.” It doesn’t matter that debate, discussion, and questions lead to practical problem-solving.

I sometimes wonder if Jesus adds fuel to the bull fire when He challenges us to take a stand with Him? After all, we are asked to choose. We’re asked to make a solemn declaration regarding our loyalty to Jesus. There are only two choices according to the gospel accounts.

As the ministry of Jesus reacher larger numbers of people, His popularity was on the rise. He was healing, teaching, and challenging the political, religious, and economic systems privileging a few while oppressing the most vulnerable. And the more His popularity rose, the more aggressive those who had the most to lose looked for ways to silence Him.

His attackers started showing up and heckling Jesus in front of crowds making accusations that while Jesus was doing some miraculous things, He was breaking the law. So Jesus takes a stand with the challenge, “Anyone who is not for me is really against me; anyone who does not help me gather is really scattering” (Matthew 12:30).

Pay particular attention to the distinction that Jesus makes about gathering rather than scattering. The challenge made by Jesus is not about dividing as much as it is about unifying. Don’t get me wrong. We’re being asked to make a decision.

We either believe that Jesus is really who He claims to be or a liar. While historically, bull artists are given a pass, it was clear that Jesus was focused on the truth and exposing lies. So if His opponents could catch Jesus in a lie, they could send out their spokespersons on a media circuit to smear His reputation. This would be much harder to do if Jesus was a bull artist.

Their challenge was that if Jesus was telling the truth, which He was, they ran the risk of their negative campaign backfiring when their lies were exposed. The proven solution that is quite popular today is to send in the bull artists.

Truth isn’t of concern to the bull artisan. They easily blend truth and lies together as they weave a narrative to accomplish their intended goal. Even if there are dire consequences, they are given a pass because it’s understood that bull doesn’t need to be truthful.

Many, if not most, politicians indeed twist the truth into a self-promoting lesser true statement. But bull artists are seldom held accountable for lying. While the rest of us are held accountable when we’re caught lying.

For example, fact-checkers at the Washington Post counted over thirty thousand false or misleading statements from our former president. Yet he is given a pass by millions of Christians. This is because he is skilled in the art of bull. 3

A Fortune Magazine article noted that our former president told six times more lies in his first ten months in office than Obama said in eight years. Defenders attempted to refocus the public’s attention on the “quality of lie” told by the two. But this really wasn’t necessary since bull artisans constantly get a pass on lying regardless of the quantity. 4

Nevertheless, I’m betting that we are all guilty of bull artistry from time to time. This partly happens because of the pressure to weigh in on unfamiliar topics and our dependence on bull artists for information. In addition, most journalists are beholden to sponsors and ratings, and apparently, bull artistry gets high ratings. Perhaps this is one reason we give bull artists a pass on lying.

So what does scripture say about our cultural focus on rewarding bull over truth? The answer is quite a lot. Jesus, in particular, spoke truth to bull artistry. Spoiler alert. The bull artists didn’t handle the loving correction of Jesus very well.

Jesus quoted the Prophet Isaiah in one story where He responded to criticism that He and His followers were not following the rules. Of course, Jesus wasn’t against following rules, but he insisted that intention is critical. In other words, Jesus did not share our appreciation for bull artistry.

Jesus accused the leaders of turning away from God while claiming otherwise. “You are defined by the words that come out of your mouth,” argues Jesus, “for from your heart comes evil thoughts” (Matthew 15:18).

Isaiah was one of the numerous famous prophets who lived centuries before Jesus was born. Unlike journalists, we count on prophets to share God’s mind with us. No bull — just the facts.

Leaders in every generation, including religious leaders, struggle to keep their priorities in line with what’s important to God. And prophets were responsible for holding the leaders accountable when the gap widened enough to ignore the suffering of vulnerable and powerless citizens.

Scripture testifies that God uses prophets to warn leaders and those who support them when divine priorities are pushed aside. If God’s warnings are ignored, divine intervention, justice, and correction follow. While the stories in scripture happened thousands of years ago, these stories are divinely constructed as insight into what is true and false.

You are defiled by the words that come out of your mouth…
Matthew 15:18

The history of God’s chosen people (substitute you and me) is a history of separation from God followed by divine intervention, transformative justice, and long periods of peaceful abundance. During one of the times of separation, God warned the people through Isaiah that the leaders “carry out their schemes in secret and think no one will see them or know what they are doing. They turn everything upside down” (Isaiah 29:15-16).

“Upside down” is explained by illustrating God’s plan for transformative justice. “It will be the end of those who oppress others and show contempt for God.” Contempt for God is shown when “people claim to worship God, but their words are meaningless, and their hearts are somewhere else.” And when “their religion is nothing but human rules and traditions” (Isaiah 29:13).

In another story found elsewhere, Jesus walks in on His team, arguing over which one of them is greater than the others. Rather than correct them directly, Jesus illustrates the importance of humility and focusing on what’s important. A child became a metaphor for anyone without power (Luke 9:48).

The powerless, excluded from privilege and placement, is God’s first priority. And those who choose similar preferences demonstrate faithfulness to Jesus Christ and thus honor God. Instead, bull artists focus on their own agenda, which centers around their own self-interest. Truth doesn’t enter into their consciousness.

There is clearly one time that the statement “you’re either with us, or you’re against us” rings true. Jesus made this case with leaders whose claims aren’t connected to truth. In His words, Jesus reminds us that we either spread divisiveness or we call for unity in following the truth (Matthew 15:30).

Welcome to the Wilderness experience. I’m glad you’re going with us. Belonging begins in the wilderness, where we discover the person God created us to be. And sometimes, we may stand alone. But wherever we stand, we’ll know that we belong.

1 Brené Brown. Braving the Wilderness — The Quest for True Belonging and the Quest to Stand Alone. New York: Random House, 2019.