Perfect storm: Watching out for sparrows 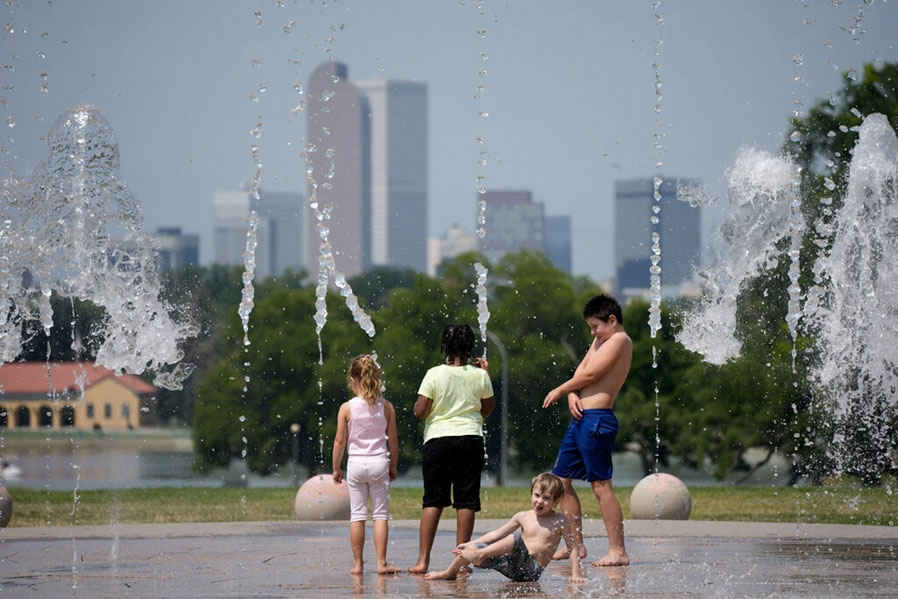 The sky in Denver was hazy from wildfires on Tuesday as children cooled down in a fountain. Credit: David Zalubowski / Associated Press

Each morning I look at a weather map that includes fronts and radar images of precipitation. Most days, the map of North America is cluttered with highs and lows, some stretching a thousand miles or so.

It has been decades since I sat in a ground school lesson on the subject of weather. Pilots rely on knowing enough about current conditions and possibilities for severe weather to avoid dangerous situations. This is important because the fuselages of most airplanes aren’t constructed to withstand the turbulence found within clouds that tower thousands of miles above the earth.

Nowadays I check the weather more than once during the day. I do this because I know that the experts who publish the forecasts make frequent changes. This is necessary because weather patterns are less predictable than they were only a few years ago.

In a New York Times article with the headline, How Severe Is the Western Drought? Nadja Popovich writes about the intense drought that has Western states held tightly in their grip. Popovich, citing the government’s official drought-tracking service, the U.S. Drought Monitor, notes that, “The Extreme conditions are more widespread than at any point in at least 20 years.”

Her article appeared last month and included the quote, “And the hottest months of summer are still to come.” Her warning played out as predicted.

In a more recent New York Times Morning Newsletter article, David Leonhardt analyzed temperatures over the past ten years. The verdict is that 2021 is unfolding to be the hottest summer in history. Leonhardt punctuated the impact, adding, “Summers in Washington and Atlanta are hotter than summers in Tampa, Fla., used to be.”

Last month, Ezra Klein shared the transcript of a conversation with four individuals who spend a lot of time thinking and sharing their thoughts about climate change. The background of the four individuals was diverse and included the disciplines of technology, literature, politics, and academia. The question posed to the four by Klein teased out their perspectives on whether our progress so far matches the scale of the emergency. Is our democracy up to the challenge?

The answer depends a lot on you, me, and our neighbors and our willingness to participate in the democratic process.

According to History.com, the origin of the phrase “perfect storm” is credited to a clash between Hurricane Grace and a massive low-pressure system off the New England coast in October 1991. This rare weather phenomenon created 80-foot waves that struck the coast of Massachusetts. The weather system later transitioned into another hurricane. A rare enough event that the new hurricane remained unnamed until years later when it became known as the “1991 Perfect Storm.”

Your land must not be sold on a permanent basis, because you do not own it…
Leviticus 25:23

The event was so violent that the story later became a best-selling book by the same name. Sebastian Junger’s novel featured the crew of the 70-foot fishing boat, Andrea Gail. It is believed that the crew was fishing for swordfish when the storm hit and went down during the storm.

Perfect storms seem to be occurring with greater frequency. So why is there so much disagreement about the sense of urgency towards the subject of climate change?

Katharine Hayhoe is the lead pastor’s wife at a church in Lubbock, Texas, known as the Church without Religion. Professor Hayhoe is also a climate scientist at Texas Tech University.

Dr. Hayhoe describes the adventure she experiences when she shares her “other job” with fellow evangelical Christians as coming out of the closet. The question she most often hears from parishioners and visitors at church is, “How can you be a Christian and believe in climate change?”

The professor can answer for herself much better than I can. So I answer this question for myself based on what I believe to be true from scripture. But I really like her initial answer to this question. “I don’t,” she responds. “But didn’t you say that you are a climate scientist?”

Her response offers us a way to avoid the latest “trap” set by political soundbites. Climate change is not a religion and not a belief system. It is based upon scientific observations and factual evidence. Therefore, recognizing that climate change is taking place should not conflict with what we believe to be true about God.

One of the ancient Mosaic laws that are seldom referenced from Leviticus helps us recognize our responsibility towards climate change. The law reads that “Your land must not be sold on a permanent basis, because you do not own it” (Leviticus 25:23). “But the deed had my name on it, and I pay the property taxes, so don’t I own it?” we ask.

The answer, based on scripture, is no. We don’t even rent the land we walk on. God asked us to take care of God’s creation during our time on God’s earth. We’re expected to do community service in exchange for the privilege of living on this earth. Any money we pay to others is between them and us. God is still the owner and never gave up title.

Moreover, according to scripture, God is quite fond of creation. We read in the Gospel of Matthew that all of creation is significant. Jesus asks the question, “What is the price of two sparrows—one copper coin?” Sparrows were sold in the marketplace to the poor who couldn’t afford a more substantial sacrifice. Sparrows were a bargain.

Nevertheless, Jesus added that “Not a single sparrow can fall to the ground without God knowing it” (Matthew 10:29). So apparently, God pays very close attention to how well we care for creation.

The climate turns out to be a telling report of our track record of caring for creation. And with our climate as a result of our actions, we’re receiving notice of a failing grade.

The argument that climate change is not happening is over. It’s time to fire politicians that block legislation aimed at turning the downward spiral around. Let’s plan to use a legislature’s track record on matters affecting the climate as their report card, and vote accordingly.

I pray that you join us this Sunday at 10:30 am, either in person or online. If your miss our live broadcast, you can find our recording on our YouTube channel. We include a link on our Facebook page for your convenience.

Plan to join us next month for our series, Night vision. In this series, we consider the contrasts of light and dark in both scripture and daily life.