Rocks and hard places: Exile and the blame game1

“You made me mess up!” the four-year-old says to her sister as the blocks she carefully placed into a work of art tumbles into a pile of chaos. “What did I do?” her sister shouts back.

It starts young, as though blaming others is in the human DNA — a part of the original plan. Andrea Blundell begins her article on this topic by defining blaming as “the fine art of making others responsible for all the difficult things that happen to us.” Sometimes we call it the “blame game.”

Psychologists call blaming others a “self-serving bias.” Research uncovered that many of us take the credit when things go well, but we prefer to blame others when things don’t go well. It’s difficult to admit we’re wrong, we made a decision that turned out bad, or we simply messed up. Mainly when the consequences are undesirable. 2

The Book of Jeremiah’s prophecies describes a time when the people of Judah were confronted with the consequences of their choices. They found themselves with tough choices. Let’s say they were between a rock and a hard place. Let me explain.

First, it’s essential to distinguish between the people with privilege and power from the poor and marginalized. While no one group of people had a monopoly on bad decisions, this story’s focus is on the people who knew better and had the power to make better choices. And God, speaking through the prophet Jeremiah made this abundantly clear.

The nation of Judah were descendants of tribes first chosen by God to be an example of why we should all want to live according to God’s plan for humanity. But somewhere along the way, their priorities shifted towards, shall we say, a “self-serving bias.” The idea that all people are of value and putting others’ needs ahead of their own was replaced with an “everyone for themselves” and “I matter more than you” approach. And their day of reckoning was coming near.

Historically, God’s covenant with their ancestors meant that they enjoyed divine protection. Somehow things nearly always worked out for them. They prospered, and their nation was the envy of the world. But during Jeremiah’s time, this was no longer the case. And the latest bully on the block had plans to take over. It was clear that should Judea’s enemy, the Babylonians, attack them, Judah’s people were on their own. God was on the side of their enemy in the impending battle.

God pleaded with the people through Jeremiah and other preachers, priests, and prophets to change their ways. But they refused. God warned them that Babylonia would soon attack and prevail. And their only choice at that point was to surrender. Let’s call this their hard place.

The leaders had two choices. They could have turned back to God and lived by the covenant that God offered. I’m calling this choice their rock for a couple of reasons. First, God is immovable, permanent, and insistent on God’s way. For some reason, their knowledge, wealth, and power were more important to them. The idea of giving up their privilege and sharing with the poor was apparently too much for them. 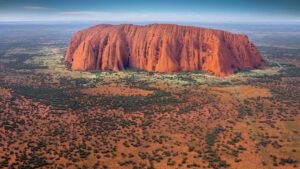 But if they surrendered to the Babylonians, they would lose their power and privilege anyway. The Babylonian military would take them away into exile. And God warned them through Jeremiah that exile would last a long time. But God also promised that exile would eventually end and God would welcome them back into covenant.

The people of privilege found themselves between a rock and a hard place, given their two choices. So they did what any four-year-old learns how to do. They blamed everyone but themselves. They blamed the victims. If only they were smarter, worked harder, they could have more. They denied that systemic racism was real, despite the apparent facts of the case. They created their own version of the truth that kept them in power while marginalizing others.

So those at the top who had the most power and the most to give up took a third option. They would fight to hold onto power despite Jeremiah’s warning from God that they would not prevail. And history proved Jeremiah’s prophecy was correct. Those at the very top perished at the hands of the Babylonians. Those with knowledge, wealth, and privilege lost what they had, except their knowledge, and went into exile.

The Babylonians left the poor and marginalized to enjoy whatever was left behind by those going into exile or stolen by the invaders. We don’t learn a lot about this group except that they weren’t being punished. They were the victims, and God would find some other way to care for them. But they also didn’t get to write the story. But that’s a topic for another day.

This is the issue, isn’t it? As a nation, we find ourselves roughly in the same place as the people of Judah did centuries ago. We finally removed a person willing to do anything to hold onto power. Still, we’re left with other leaders willing to keep looking for that third option. I’m not trying to name our Babylon, but there are plenty of threats to keep us on edge. And an invisible virus seems to be holding most of the power as of late.

We’re left with two choices where life continues. Those of us with knowledge and the privilege of making choices can surrender to exile. We can do this knowing that exile is temporary. But this means giving up our privilege. But we can hold onto our knowledge. Eventually, we end up back at the rock.

We don’t have to go somewhere else to exile. As long as we are living apart from God, we’re already in exile. Eventually, we learn that there is only one choice if we want to live. And that’s the immoveable, permanent, and eternal Rock of Salvation.

1 Some of the content for our series comes from Melissa Spoelstra. Jeremiah: Daring to Hope in an Unstable World. © 2014. Nashville: Abingdon Press.