As I write this article, I’m acutely aware that this week is the anniversary of the attack on our nations’ capital. I’m also mindful of how politicized this event was before, during, and after the event took place. And, like most of you, I have opinions.

It would be naive to think that I can tackle the most significant issues that got us here. I’m sure that I would struggle to name them without missing an important point. Nevertheless, some of the problems are obvious. Most of the issues are the subjects of articles, news coverage, and books.

Brené Brown wrote Braving the Wilderness before this event happened. A week after January 6, Dr. Brown dedicated an episode of her podcast, “On My Mind,” to offer her thoughts on how this can happen. After all, we live in a country that prides itself on democracy and self-control. Reading a transcript of her podcast is like reading sections out of her book. 1

While Dr. Brown didn’t predict that January 6 would happen, she clearly laid out the failures that created the underlying issues. In a summary of her podcast, Dr. Brown says, “I’m going deeper today [into shame and accountability] in light of the insurrection at the U.S. Capitol building and the resulting calls to unity without accountability.”

Her podcast and, more so, her book does a much better job of laying out the results of her years of research into shame and vulnerability than I can. And this week, our focus is on accountability and what we can do to avoid the dehumanizing that resulted in the unthinkable happening a year ago. An attack on our capital by our own neighbors.

In her podcast episode summary, Dr. Brown writes that “Dehumanization is the most significant driver of insurrection, and it always starts with language.”

Professor Michelle Maiese defines dehumanization as “the psychological process of demonizing the enemy, making them seem less than human and hence not worthy of humane treatment.” In other words, dehumanizing begins by first creating an enemy image. One that places people on the other side as dangerous and morally inferior, followed by framing the disagreement as good versus evil. 2

Historically, dehumanization fueled violence, human rights violations, war crimes, and genocides. Dehumanization makes slavery, torture, and human trafficking plausible by creating moral exclusions. We remove the shame of denying humanity to others by first recasting them as less than human.

January 6 was possible, Dr. Brown reminds us because we’ve tolerated and even participated in dehumanizing others who have a different ideology. Dehumanizing is a critical first step in waging war against other people and nations, including cold wars, economic wars, and a war on terror. However, declaring war on domestic terror is more complicated because the perpetrators look and sound like us. Those who attacked the U.S. Capital are our neighbors.

On accountability, Dr. Brown writes that “We are all responsible for recognizing it [dehumanizing], stopping it, and holding people accountable for dehumanizing language and actions.”

As I try to understand wher e we are as an experiment in democracy, my context is based on my interpretation of scripture. This is both my vocation and my calling. However, this doesn’t give me a claim to the moral high ground. If anything, trying to recommend the next steps to resolve our political divide based on lessons from scripture makes me more vulnerable than my courage is accustomed to allowing.

Scripture focuses on individual actions in assigning righteousness to individuals. For example, a person who harms another person is unrighteous due to their action. Our belief in Jesus Christ does not reverse the harm done by past transgressions. Instead, we are forgiven and given a second chance to take steps toward doing good.

We find the Story of Job in the wisdom section of scripture. Job was known to be a righteous man, but he was stricken with several losses in terms of health and family. The bulk of the story involves Job’s conversations with his closest friends, trying to help Job determine the root cause of his misfortune. Indeed, Job’s losses came from a God who rewards the righteous and punishes the unrighteous. Job only needed to discover what horrible thing he had done.

Through it all, however, Job maintains his innocence.

Eventually, Job gets his chance to confront God directly. But his day in court doesn’t go as Job hoped. While God ultimately has power over all creation, there is no direct link between righteous acts and material reward. God doesn’t participate in a divine reciprocity.

For then you would guard my steps, instead of watching for my sins. My sins would be sealed in a pouch, and you would cover my guilt.
Job 14:16-17

During one of Job’s monologues leading up to his confrontation with God, Job asks, “Can the dead live again?” As a Christian, I quickly jump to respond “yes,” citing one or more assurances from scripture. However, Job’s question comes during a speech that sounds more like an attorney’s argument before a judge. Suddenly, Job reverts to a softer, prayer-like attitude. His question is directly probing and filled with authentic hopefulness. “Can the dead live again?” (Job 14:14).

“If so,” Job continues, “this would give me hope through all my years of struggle.” We know that Job’s hope is shared among humanity and fulfilled in the resurrection of Jesus Christ. Job’s prayer continues with an affirmation of God’s affection and protection that logically follows the possibility of death’s defeat.

Job concludes, “For then you would guard my steps, instead of watching for my sins. My sins would be sealed in a pouch, and you would cover my guilt” (Job 14:16-17).

Paul, trained as a lawyer, expands on Job’s question in his letter to the church in Rome — “Who, then, can separate us from the love of Christ? Can trouble do it, or hardship or persecution or hunger or poverty or danger or death?” (Romans 8:35).

Answering his own question, Paul concludes that “Neither death nor life, neither angels nor other heavenly rulers or powers, neither the present nor the future…there is nothing in all creation that will ever be able to separate us from the love of God which is ours through Christ Jesus our Lord” (Romans 8:38-39).

And this means that despite the unthinkable happening, despite the divisions between us, and regardless of which political party is in power, nothing can separate us from God. Except for our own actions. 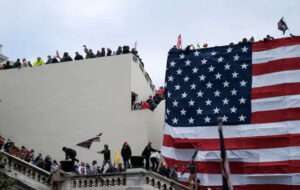 We can choose to separate from God through our choices each day. The Book of Job offers a multitude of lessons. And one that screams for attention at this time is Job’s persistence that God demands justice and accountability. We are liars if we say that we love God but hate others.

So many horrific scenes emerged out of the January 6 attack on our capital. The breaching of the walls surrounding our center of democracy; the attacks against police officers by individuals dressed for violence; the shouts to hang the Vice President for not overturning the results of our democracy.

For me, the most horrific image was the same mob carrying a cross and gallows for execution.

The process of healing and re-humanizing our language and images begin with accountability. The mob was planned and incited by a call for violent attacks from the highest levels of our government. Too often, anger and dehumanization are supported by religious leaders willing to tolerate dehumanizing others.

Our nation has an unfortunate history of dehumanizing others. Dehumanizing others based on skin color, national origin, sexual orientation, gender, ideology, or any other way of sorting them out makes the unthinkable possible. But re-humanizing by first recognizing the language and images that strip others of their humanity is a great starting point.

We’re proud to be citizens of the greatest country on earth. But our pride is a stumbling block when we place leaders above the law regardless of the justification. Dr. Brown notes that “When the culture of any organization mandates that it is more important to protect the reputation of a system and those in power than it is to protect the basic human dignity of the individuals who serve that system or who are served by that system, you can be certain that the shame is systemic, the money is driving ethics, and the accountability is all but dead.”

We are a small group of people with enough problems of our own. Our voices are not likely to be heard beyond the boundaries of our own community. Nevertheless, we too are often divided in our opinions and risk dehumanizing others we disagree with. Belonging is central to who we are and our longing to be connected with others. But we belong only when we are the person God created us to be. And God created us to love our neighbor and ourselves with equal affection.

How about taking the next step? The next time you find yourself in an uncomfortable conversation with someone who sees the world differently. Instead of walking away, arguing your case, or shutting them out. Try saying to them, “Tell me more.”

Welcome to the Wilderness experience. I’m glad you’re going with us. Belonging begins in the wilderness, where we come to discover the person God created us to be. And sometimes, we may stand alone. But wherever we stand, we’ll know that we belong.

1 Brené Brown. Braving the Wilderness — The Quest for True Belonging and the Quest to Stand Alone. New York: Random House, 2019.