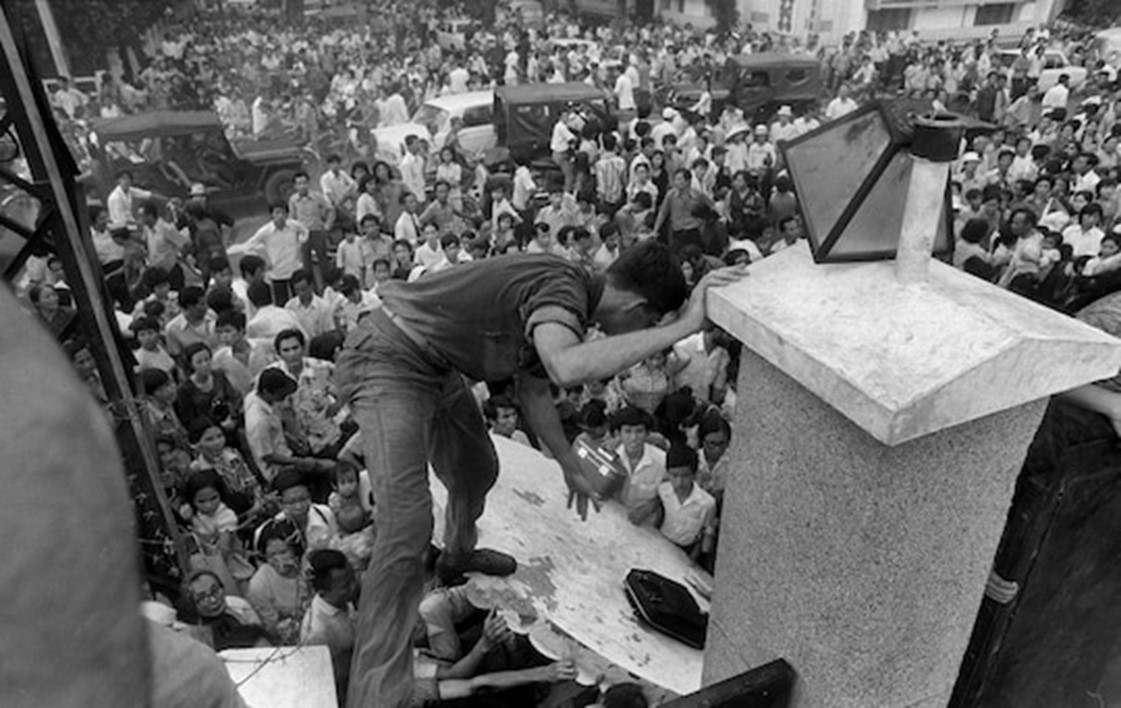 South Vietnamese civilians try to scale the 14-foot wall of the US Embassy in Saigon, hoping to reach evacuation helicopters as the last Americans departed from Vietnam on April 29, 1975 — AP

Despite the resurgence of infections of COVID, the pandemic is not the lead news story on most days. So in some ways, the pandemic is a fill-in for a slow news day, which comes a lot less than I prefer.

The chaotic departure of over 100 Thousand people as the last U.S. soldiers departed Afghanistan dominated the headlines for most of the last week of August. That is until Hurricane Ida hit the southern coast. Followed by flooding in the subways and streets of New York City.

In his closing comments Thursday night, David Muir noted that the Labor Day weekend would be void of the usual backyard barbecue for thousands of people displaced from their homes. The suffering of others is difficult to set aside, even during times of celebration.

In all of these cases, recovery takes decades, and the impact lasts for generations. And most of us observe, empathize, and pray from a safe distance. So for most of us, this Labor Day weekend is not that different from other Monday Holidays. If we’re fortunate enough to have the day off, we may work on home projects, attend a parade, and a lot of us will light a barbecue.

As we begin episode one of our new series, Holy envy, it is essential to point out how current events connect with our subject matter and scripture. First, a little background on how Labor Day became a holiday unique to the United States.

As the name implies, Labor Day celebrates work. More specifically, this holiday focuses on the often uncelebrated, sometimes backbreaking work of those who build and keep our economy going. Historically, labor and immigration go hand-in-hand when finding workers willing and able to do jobs that require long hours and low wages. Whatever the reasons that bring strangers to this country, survival usually involves working, whether on or off the grid.

In a New York Times article, Karen Zraick reminds us that by the latter part of the 19th century, many laborers commonly worked 12-hour days with no Sabbath Day off. In addition, work conditions were often harsh, with little concern for the safety of workers. And child labor was common. 2

Bringing workers together to stand up against oppressive work practices took courage, and success required capturing public sentiment. The first Labor Day parade took place in 1882 when approximately 10,000 workers marched from New York’s City Hall to an uptown park where they held a picnic. Seen more as a “strike” than a celebration by employers, the workers took a significant risk that they might lose their job. Particularly since many of the participants carried signs demanding changes that included 8-hour workdays and higher wages. 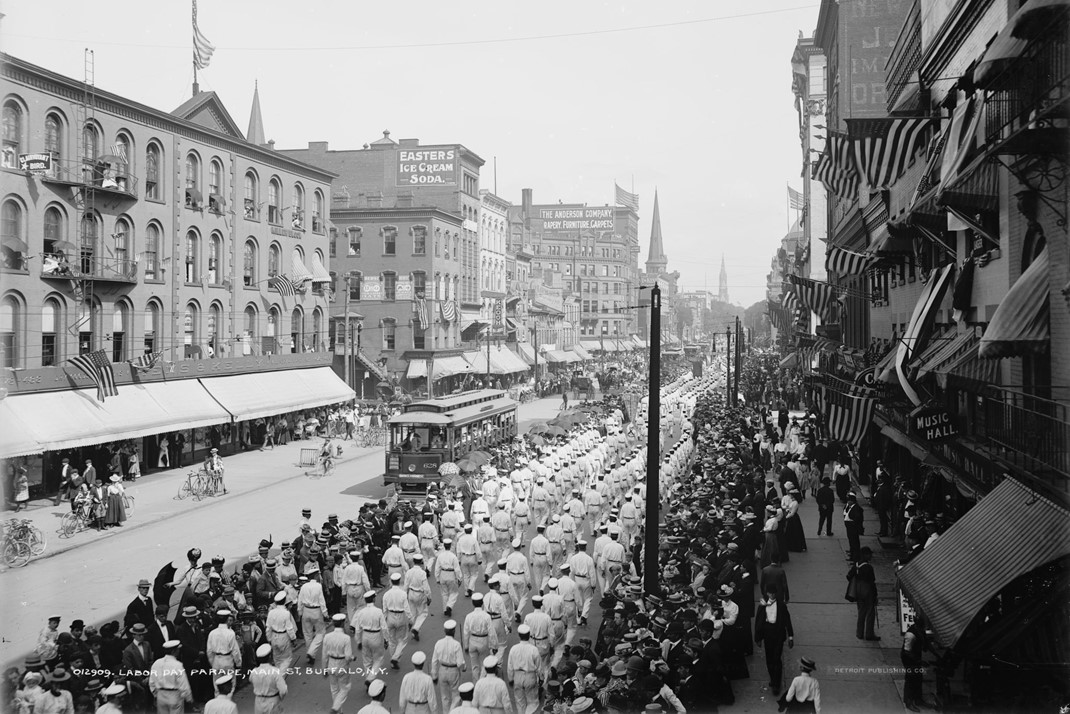 President Grover Cleveland officially named the first Monday in September as an official U.S. Holiday in 1894. Since the new law was signed during a period of work disruption initiated by employees of Pullman Corporation in Chicago, this was seen as a political maneuver to appease the public. Nevertheless, the September date was chosen over May 1st, commonly called International Workers Day, when other countries celebrate working and workers.

Work in the United States is often the great equalizer in bringing diverse groups of people together to get something done. And the history of religious diversity in our country is a part of the history of work.

In her book, Holy Envy, Barbara Brown Taylor writes that the first Muslim to come to the new land was Estevancio of Azamor. A guide initially from Morocco, he landed in Florida with an expedition from Spain in 1528. Thousands more soon followed. By some estimates, one-third of Africans brought to this country as slaves were Muslim. They were later joined by Muslims from Europe, the Middle East, and India.

According to Wikipedia, the first mosque appeared in Michigan in 1926 in Highland Park, Michigan. The Dearborn Mosque, which appeared in 1937, claims to be the 2nd mosque built in the United States. However, according to the Harvard University Pluralism Project, Muslims started to build mosques in Maine, North Dakota, Michigan, and Indiana as early as 1915. Before building Mosques, prayer took place in private homes or rented public spaces, which eventually grew into Islamic associations.

Six Hindu men from India marched in the annual July 4th parade in Salem, Massachusetts, in 1851. They were employees of the East India Marine Society. The first Hindu Temple appeared in San Francisco in 1906 by the Vedanta Society. Based on a particular Hindu philosophy, this group was first organized in the United States by Swami Vivekananda, who spent two years speaking at numerous events around the country. His 1893 address at the first World Parliament of Religions in Chicago was so popular that he became a favorite guest speaker. This kept him in this country for a couple of years beyond his original plans.

It’s believed that Buddhists began showing up during the mid-1800s working in various capacities as miners, loggers, fishermen, farmers, and construction workers. By 1860, ten percent of Californians were of Chinese descent. Montana experienced similar growth. Some of the earliest Buddhist temples appeared in the late 19th century.

Not all immigrants were welcomed with open arms. For example, the Chinese Exclusion Act of 1862 stopped most immigration from China. The Immigration Act of 1917 added exclusions for persons from India, the Middle East, and other Asian countries. A national-origins quota was made into law by the Johnson-Reed Act of 1924, which reduced the number of immigrants from Southern and Eastern Europe to “preserve the ideal of American homogeneity.” Some of the laws were repealed in 1943 and 1952, with more extensive revisions adopted with the Immigration Act of 1965.

A professor of world religions, Barbara Brown Taylor, recalled a comment from one student who said, “If you really are a Christian, then you are going to help us see what is wrong with these other religions?” If this wasn’t her aim, the young man planned to drop her class. In the mind of this student, being Christian required absolute loyalty to the truths he believed and defending them against any and all rivals. So he dropped her class after the first session.

I’m wondering if her student plans to celebrate Labor Day this year? If so, will his celebration be limited to workers who attend his church?

This brings me back to the end of the 20-year war in Afghanistan. Sadly, If I were writing this article during my senior year of college, my illustration might be the ending of the Vietnam War. The pictures of thousands of people trying to hitch a ride to the United States before the last U.S. Soldier left look familiar.

The Honorable Phan Quan Tue writing last month in the Washington Post, shares his painful memories of desperation as he recalled his family of four, including his pregnant wife and two small children sitting on the floor of a C-130. The former Immigration Judge described the scene as “A moment of collective humiliation, to have to leave one’s country under these circumstances. The irony was that we knew we were being saved by the very same foreign government that did not stand behind its commitment to its allies in South Vietnam.” 3

After twenty-one years, the presence of U.S. Troops in Vietnam was finally coming to an end. I remember it well because military withdrawal began a couple years earlier and kept me from being drafted and potentially serving in Vietnam as my brother did a few years before. It was a war that the U.S. couldn’t win. Despite the overwhelming differences in the size and might of the two enemies, the North Vietnamese were well supported by our larger enemies. This is one of many striking similarities to the circumstances surrounding our 20-year involvement in Afghanistan.

That same year, the judge and his young family would find a mixed bag of hospitality and hostility towards their presence. Phan Quan Tue initially worked in numerous low-paying jobs. But he eventually attended law school, served as an immigration attorney, and failed in his bid for election to the U.S. House of Representatives as a Republican candidate in 2014. The sources I found on Phan Quan Tue only stated that he “moved” to the United States without mentioning the circumstances of his family’s mode of transportation and status as refugees.

Barbara Brown Taylor offers this warning to her students of Religion 101 that is just as important to you and me. She writes that “Religious illiteracy is a luxury they can no longer afford.”

As a student of the historical Jesus of Nazareth, the parallels between 1st Century Palestine and the present never ceases to amaze me. And as a Christian who believes that Jesus is also God living among people, His teachings mean much more to me than the wisdom that I find in thousands of other sources.

Nevertheless, I appreciate Barbara’s distinction between the metaphors of living water and the well. I know and appreciate the nuances of the well I depend on, and I’ve come to rely on drawing enough nourishment with each pump of the handle.

But I’ve also learned the importance of respecting that more people know a different well as their source of living water than know the well I count on. So navigating between my calling to share my own experiences with Jesus and God’s insistent that I treat each person I meet as crucial to God is challenging at times.

One of my favorite stories about Jesus occurred when He was traveling among foreigners. Stopping at a village well in Samaria, a woman comes to the well to draw water. The woman is puzzled when Jesus asks her to share her water. People from the place where Jesus came from didn’t spend time with Samaritans. Moreover, a Jewish man would never speak to a strange woman.

Jesus tells the woman about water that gi ves life to the thirsty. “Give me some,” the woman responds, perhaps with a bit of attitude and disbelief.

Perhaps we sometimes confuse the water with the well.

In this month’s series, Holy Envy, we look for God in the faith of others. In doing so, we expect to experience holy envy from time to time. That is, we anticipate once in a while wondering whether the water might be a bit sweeter coming out of our neighbor’s well. I anticipate that the outcome will be a greater understanding and knowledge of our own well. Plan to join us.